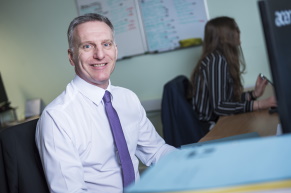 Burton-born Richard began his journey with Alexander Accountancy on a part-time basis in 2013, joining full-time in 2015.

What a lot of people won’t appreciate is just how impressive it has been to watch how quickly Richard has risen through the ranks and we’re proud that he was appointed and welcomed as a Shareholder and Director of Alexander Accountancy in April 2020. All of this has been

achieved only five years after he joined the business as a trainee following a career change, and in which time he completed his Association of Accounting Technician exams in a matter of months.

For many people there will appear to be a lack of experience for someone at this level, but he has joined me, David Alexander, and Wayne Penlington his fellow Director who have 75 years’ experience between us, and will be sharing our knowledge and experience with him.

One great benefit is that Richard has not brought any baggage with him so has willingly immersed himself in the culture of Alexander Accountancy. A firm built on the ethics of looking after those around us, and that means contacts, customers, employees and suppliers. Richard now exemplifies this commitment as well as if not better than any other member of the team.

It is also a pleasure to work with someone that really buys into the team ethic, is polite, courteous, caring, fiercely loyal and never gives less than 100% in everything he does.

But none of this should really come as a surprise. In his younger days Richard was a keen footballer and driven to rise as far through the ranks as possible. He progressed through the local leagues, played for a couple of very local non-league clubs, and was eventually taken on by one of England’s top 6 professional clubs.

Richard has brought that professionalism and drive into his career development; I rate him as someone you can really be proud to have on your side and who you want to have in your team. So well done Richard and welcome to the Board.

Richard’s Accountancy Tip: “Always know where you want to get to, so your accountant can maximise your income to help you get there.”